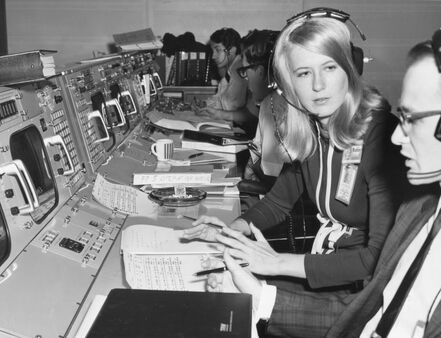 Northcutt in NASA's Mission Control at the Johnson Space Center during the Apollo Mission - December, 1968
Frances “Poppy” Northcutt worked on the Gemini program, doing calculations. Then, she was promoted to a technical position and worked on how to return a spacecraft to Earth. She was the first woman to work in an operational support role in the Mission Control Center in Houston during the Apollo program. She was in a staff support room that directors in the main mission control room would call for assistance. She was the only woman in the room. When the astronauts were close to the moon, she would alternate with another employee to work 13 or 14 hour days. Overall, Northcutt worked on the Gemini program and Apollo missions 8, 10, 11, 12, and 13.

Poppy Northcutt is also a women’s rights activist. She worked with other female employees at the Mission Control Center to improve  benefits for women, such as maternity leave. After the Apollo missions, she was a women’s advocate in the Houston mayor’s office. There, she made changes to allow women to become firefighters and police officers. She also counted the number of women’s and men’s bathrooms in Houston, finding that there were more men’s bathrooms than women’s. Then, she worked to increase the number of women’s bathrooms. She also studied pay equity in Houston.

Northcutt became a prosecutor, then a criminal defense attorney and worked on reproductive rights and intimate partner violence cases. She is also the president of the Texas chapter of the National Organization for Women.

When Northcutt was working for TRW, a company that helped build spacecraft, her job was colloquially called the “Computress.” She said, “What a weird title this is. Not only do they think I’m a computer, but they think I’m a gendered computer.” According to the law, women could only be paid for up to 54 hours per week, but she worked 60 to 70 hours per week.

When Northcutt was the only women in Mission Control for Apollo 8, reporters described her not for her talents in science and math, but instead as a “beautiful star that guided astronauts home.” She was asked, “How much attention do men in Mission Control pay to a pretty girl in a mini skirt?" by a reporter from ABC. Much of the media's attention was focused on her appearance, and not her work at NASA.

One of the only other female engineers, Parrish Nelson Hirasaki, said that male coworkers would sometimes ask Northcutt to make coffee. Northcutt would reply, “My ovaries do not uniquely qualify me to make coffee.”

Northcutt was even watched on cameras at work. She felt uncomfortable reporting this at the time because she wanted to be accepted by her male coworkers.

However, Northcutt has said that “The people who were ... really being discriminated weren't me,” she says. Instead, they were the women of color who worked behind the scenes to make her work possible. These women were paid low wages, whereas Northcutt was paid more and received promotions. 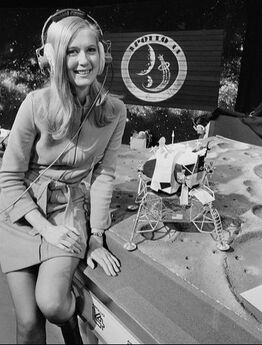 Poppy Northcutt with a model of the Apollo 14 lunar module
Northcutt grew up in Texas, and studied math at the University of Texas. She was hired at TRW, which was contracted with NASA, directly after college. At first, she worked as a computress, making calculations for the engineers.

She worked for Gemini, then the return to Earth for Apollo. In 1966, after six months of work, the operations manager told Northcutt she would be promoted to be a member of the technical staff, and she worked on Apollo missions 8, 10, 11, 12, and 13.

After working at NASA, Northcutt moved to Los Angeles and worked on anti-ballistic missile weapon systems. She was unhappy with her job, and moved back to Texas to begin her advocacy work.