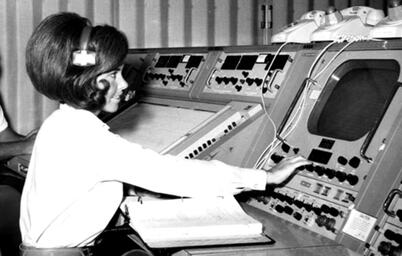 Judy Sullivan monitors biomedical data during an Apollo 11 training exercise at the Kennedy Space Center
In 1966, Judy Sullivan became the first female engineer in NASA’s Spacecraft Operations. She was also the first female engineer at NASA to support spacecraft testing. As a  biomedical engineer, Sullivan was the lead engineer for the biomedical system for Apollo 9 and Apollo 11. One of her roles was to make sure astronauts were healthy enough to go on the mission. Just before the launches, she monitored date from biomedical sensors on the astronauts. She was the only woman to help Neil Armstrong put his suit on before the launch, and she was also the only woman in the control room she was in during the launch. 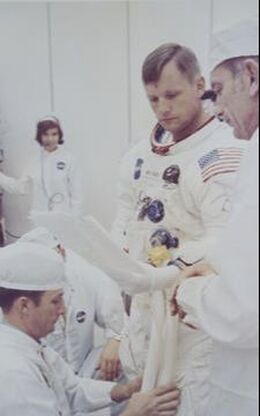 Judy Sullivan (in the background) as Neil Armstrong suits up for the Apollo 11 mission
Judy Sullivan has said, “They'll give you every reason in the world why they can't have a woman over there. They'll even tell you there are no female bathrooms.”

Sullivan was required to wear a skirt or dress with high heels. This became a problem when she had to climb onto large machines, and in those cases she was allowed to wear pants. Another unique experience about being the only woman, Sullivan has said, is that everyone would know if you messed up. For example, everyone talked over the headsets. While many of the male voices were indistinguishable from each other, everyone would recognize the female voice and would know who it is. One time, Sullivan accidentally had her headset on and said that a certain steakhouse had the best filet. Luckily, her coworkers laughed it off.

When she was on the game show “To Tell the Truth,” a panel had to guess which female was a biomedical engineer. Nobody could guess the engineer was Sullivan, and she won $500.

However, Sullivan has said that luckily she did not feel much discrimination from the men she worked with. Instead, she saw many of them as older brothers. 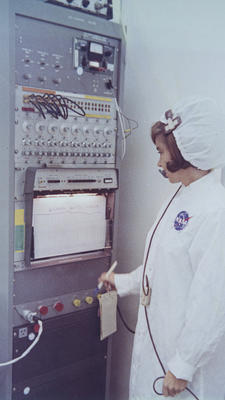 Judy Sullivan using a machine that records biomedical data
Judy Sullivan grew up in Alabama, where she was valedictorian of her high school. At Jacksonville State College, she majored in biology with minors in chemistry and math. She was the salutatorian of her college class. After college, Jackson wanted to go to medical school but did not have the money. Instead, she moved to Cocoa Beach, Florida, in 1966 and became a anatomy, physiology, biology, and algebra high school teacher.

Due to her low pay, Sullivan looked for a different job and was hired by NASA. She moved to St. Louis.

After working on Gemini 12 and Apollo 8, 9, and 11, she moved to Ithaca, New York, because her husband was accepted into Cornell’s MBA program. She went back to teaching, this time at a middle school. When her husband graduated, he got a job and they moved to Lehigh Valley in 1971. She got a job as a substitute teacher, then became a food technologist at Kraft Heinz. When she had a son, she quit her job to take care of him.