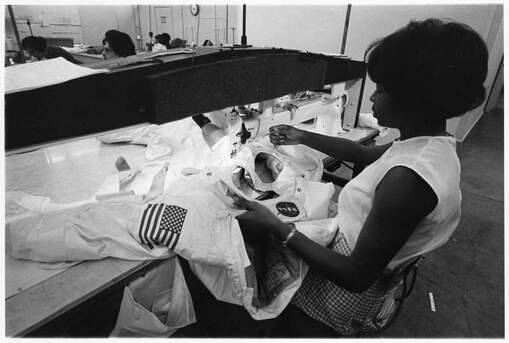 A seamstress works on a spacesuit for Apollo at the ILC Dover plant, 1968
Although many women broke barriers and defied stereotypes as scientists, mathematicians, and engineers, others made important contributions to the moon missions through their talents in sewing.

In 1962, NASA hired the International Latex Corporation, also known as ILC Dover, which mostly employed women, including women of color. These women worked with the male engineers to design the spacesuits. While the engineers had ideas about how the parts should be put together, the seamstresses had to figure out how to actually make these ideas work.

Spacesuits were particularly challenging to sew. Sometimes the seamstresses used a blind stitch, which is when they could not see what they were sewing and had to feel underneath the fabric. Considering the spacesuits protected the astronauts from the harsh environment of space, their work was incredibly important.

ILC Dover space suits were worn on the Apollo missions and have also been worn on the ISS. Today, space suits are still mainly produced by women, considering that there is currently only one male seamstress at ILC Dover.