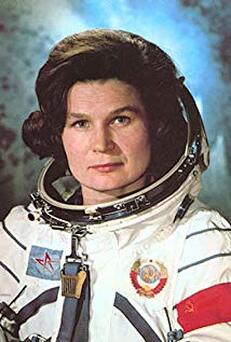 Valentina Vladimirovna Tereshkova was the first woman in space, flying from June 16 to June 19, 1963 on the Vostok 6, a Soviet mission. She used manual controls to orbit Earth once every 88 minutes for a total of 45 revolutions. At the time, this was the record number of orbits. She was just 26 years old.

Tereshkova is the only woman to have conducted a solo flight into space.

​She challenged many female stereotypes. In the United States, many perceived Soviet women as “graceless, shapeless, and sexless,” miserable, and shabby working class women according to historian Robert Griswold. He also says that the “American conception of Soviet working class femininity became a way to reassert the boundaries of proper womanhood.” After Tereshkova completed her mission, American perceptions of Soviet working women changed to “female physicians in lab coats, women engineers with their slide rules, even a young cosmonaut in her spaceship.”

Tereshkova represented the Soviet Union at the United Nations conference for the International Women’s Year in 1975. She also was the head of the Soviet Committee for Women from 1968 to 1987.

In competition with the United States, the Soviet Union wanted to be the first to send a woman to space. This resulted in Tereshkova being used as propaganda. She was presented as an example of equal rights in the Communist USSR, and she was used by Nikita Khrushchev to one-up the U.S. He said, "Look at what she has shown to America's astronauts. She has shown them who is who!"
​
After Tereshkova's mission, the Soviet Union planned for another mission led by a woman. However, the head of the space program, Sergei Korolev, said that he did not want to "risk women's lives because one of the women in the space corps already had a family," according to Tereshkova. Her and the five other female cosmonauts at the time wrote a letter disagreeing with him. However, it was 19 years until the Soviet Union sent another woman to space.

Furthermore, the American media often focused on her appearance. For example, the Chicago Tribune referred to her as the “Russian blonde in space,” despite the fact that her hair was brown. Media also discussed what perfume she wore, etc. 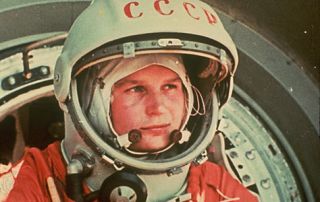 Valentina Tereshkova was born in 1937 in the village of Bolshoye Maslennikovo, in the then Soviet Union. Her father died fighting in World War II when she was just two years old, and her mother supported Tereshkova and her two siblings by working in a textile mill. At 18 years old, Tereshkova also went to work in a textile mill while also taking correspondence courses at an industrial school. She joined a club for parachutists and made over 150 jumps.

After the cosmonaut Gherman Titov became the second person to orbit the Earth in 1961, Tereshkova wrote a letter to the Soviet Space Center at Star City volunteering to be a cosmonaut. She was then invited to Moscow for an interview and medical examination. In March of 1962, she went to the space center along with three other women. They followed the same training as male cosmonauts, doing centrifuge rides and zero-G flights. The group of women became junior lieutenants in the Soviet Air Force.

In May of 1963, Terewneshkova and Tatyana Torchillova were chosen to train for Vostok 6.

After the mission, Tereshkova went to the Zhuykosky Air Force Engineering Academy, graduating in 1969. She earned a further degree in Technical Science in 1976.