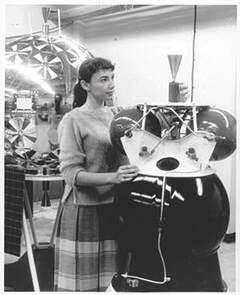 Judith Love Cohen with the Pioneer spacecraft, 1959
Judith Love Cohen was an engineer who worked on many projects over the course of her career, which spanned from 1952 to 1990. She worked on the Minuteman missile, the systems engineering for the science ground facility of the Hubble Space Telescope, and the Relay System Satellite. On the Apollo mission, she was an electrical engineer. She helped design the Abort Guidance System computer and its software on the lunar module.

She was also vital to Apollo 13’s success when the service module was damaged on the way to the moon and the power in the command module almost failed. Luckily, the orbitology team that Cohen was a part of persuaded NASA to use the return-to-earth orbit design so that if anything went wrong, the astronauts could go around the moon and safely return home. The astronauts had to move to the lunar module to stay warm, but it could not be powered for too many days and was only designed to hold two people. The computer for in-flight navigation that was in the command module had to be turned off to conserve power, and the Abort Guidance System in the Lunar Module was used to navigate back to Earth. Cohen was a part of the team that designed this system.

Cohen was an advocate for gender equality in the workplace. She worked to have job openings posted inside the company so that anyone (including women) can apply and formal job descriptions.

Cohen then worked to encourage girls to try science and math. Her first book, called “You Can Be a Woman Engineer,” was published in 1991. She expanded this idea to co-authored and co-published an eleven-book series featuring women with jobs such as a paleontologist, botanist, astronomer, architect, and marine biologist. She sold over 100,000 books in this series. Cohen and her third husband, David Katz, created a publishing company together and have also created a series featuring women in sports.

Judith Love Cohen was working to review missile systems when a coworker told her multiple times that she was “a Girl Scout trying to earn a merit badge at their expense.”

Additionally, there were no women’s bathrooms in the engineering building at the University of Southern California, where Cohen studied. She says she never saw another female engineer at USC. 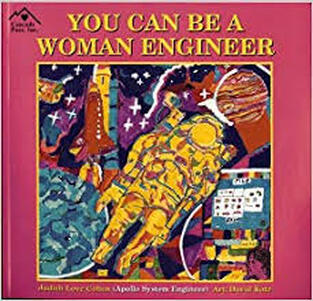 Judith Love Cohen’s first book
Judith Love Cohen was born in 1933 and grew up in Brooklyn, New York. Her mother and aunts all worked at a dress factory, and Cohen learned to sew at a young age. However, her father, a soda salesman, taught her geometry by using ashtrays. Her interest and skills in math continued from there. In fifth grade, her peers paid her to do their math homework. In middle school, she was the only girl in intermediate algebra. She won a scholarship to Brooklyn college and she wanted to become a math teacher. However, her guidance counselor told her that girls cannot go into math or science fields. She was told to go to a finishing school.

Cohen started an engineering program in Brooklyn, while also dancing in the Corps de Ballet of the New York Metropolitan Opera Ballet Company. She met her first husband Bernard Siegel, and they moved to California. Cohen went to the University of Southern California, and was the eighth female student to graduate with an engineering degree there. She then worked full-time as an engineering associate while taking night classes for further qualifications and taking care of her three young children. She eventually earned a master’s degree.

After a long career in space exploration, she had a second career as an author and publisher.