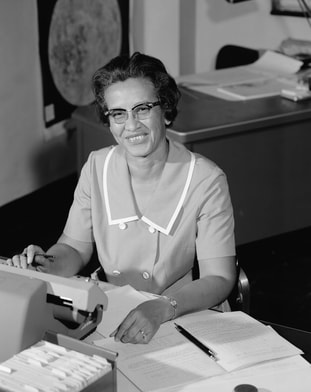 Katherine Johnson started working at NACA in the West Area Computing at Langley laboratory, but after two weeks was assigned to the Maneuver Loads Branch of the Flight Research Division. There, she analyzed data from flight tests researched a plane crash caused by wake turbulence.

In 1957, Johnson provided calculations for "Notes on Space Technology," a document that compiled lectures given by engineers who formed the Space Task group, which was the start of NACA's involvement in space exploration.

When NACA became NASA, Johnson continued to work there. She calculated trajectory paths for Freedom 7, the first human spaceflight performed by Alan Shepard.

In 1960, she coauthored a report that calculated an orbital spaceflight and the landing position of a spacecraft along with engineer Ted Skopinski. She was the first woman in the Research Flight Division to be credited with authoring a research paper.

In 1962, Johnson was asked by astronaut John Glenn to verify the computer's flight trajectory calculations for the Friendship 7 mission. Glenn said, “If she says they’re good, then I’m ready to go.”

Johnson also helped synch Apollo's lunar module with the command and service module. In addition, she worked on the Space Shuttle and the Earth Resoures Satellite.

Johnson has also made immense contributions to research, and throughout her career authored or co-authored 26 papers. 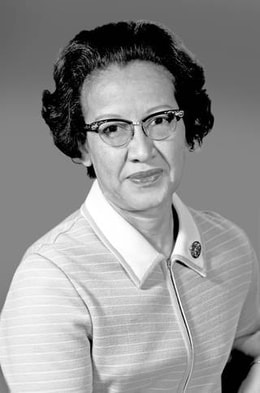 Mary Jackson was born in 1918 in West Virginia. She was incredibly smart from a young age, and skipped multiple grades. At age 13, she took classes at a high school on the campus of West Virginia State College, a historically black college. When she was 18, she enrolled in the college. There, she was mentored by W. W. Schieffelin Claytor, who was a math professor and the third African American to earn a PhD in math. Jackson graduated in 1937 with degrees in mathematics and French. After graduation, she became a teacher.

In 1939, West Virginia began integrating graduate schools. Johnson was chosen by the president of West Virginia State to be, along with two male students, the first black students at West Virginia University. She started classes in the math program, but she decided to leave in order to start a family. After raising three daughters, she returned to teaching.

In 1953, Johnson got a job at West Area Computing at NACA, and her and her family moved to Virginia. After two weeks at the job, Dorothy Vaughan assigned her to work in the Maneuver Loads Branch of the Flight Research Division.

Her husband passed away from cancer in 1956.

After a long career working on research, Freedom 7, Friendship 7, the Apollo missions, the Space Shuttle, and the Earth Resources Satellite, Johnson retired in 1986.

In 2015, at 97 years old, Katherine Johnson was awarded the Presidential Medal of Freedom by President Obama. She is portrayed in the film Hidden Figures by actress Taraji P. Henson.